San Francisco Tech Opens Its Doors to the Community…Literally

This week, sf.citi explored a lesser-known corner of San Francisco tech offices: tech community spaces, or multi-purpose rooms within tech offices that Bay Area nonprofits can use to host board meetings, workshops, and a variety of events.

For those who don’t work in the city’s tech industry, San Francisco tech offices—with their famed standing desks, dog-friendly workspaces, and gourmet snacks—can seem as ethereal as King’s Landing to the Northerners in Game of Thrones. These legendary offices, however, needn’t be the stuff of lore as many tech companies in San Francisco have, quite literally, opened their doors to the public.

Over the past month, five sf.citi member companies invited us to tour their community spaces. Fast becoming a fixture of modern San Francisco tech offices‚ and in tech hubs throughout the country, these community spaces serve as another example of how the tech industry finds ways to connect and give back to the local community. Take a look below. 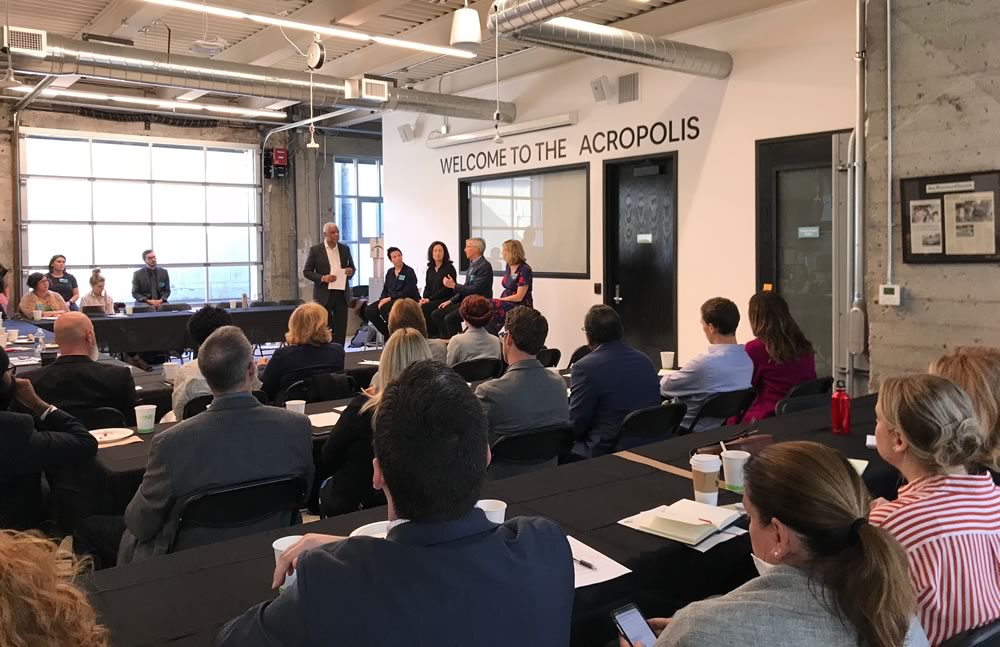 Step into the Airbnb “Acropolis,” a cozy space adjacent to the main Airbnb campus in San Francisco’s South of Market neighborhood. Like almost all of Airbnb nomenclature, the room’s title pays tribute a historic place, The Acropolis of Athens, Greece. Best known for housing the Athenian Parthenon, The Acropolis became a place of worship for many thought leaders, including inhabitants of the Roman, Byzantine, and Ottoman empires.

Though more humble in appearance than its namesake, “The Acropolis” at Airbnb also houses great minds, specifically the company’s Human Team. Focused on bolstering Airbnb’s mission of fostering belonging and community throughout the world, the Human Team spearheads social impact initiatives and oversees the Airbnb Open Homes program. In early 2018, the team opened “The Acropolis” to local nonprofits, community leaders, and civic groups for panel discussions, social mixers, team retreats, and more. Allowing the Human Team and other Airbnb employees to engage more closely with the local communities they serve, “The Acropolis” is another example of Airbnb’s commitment to the city it calls home, San Francisco. 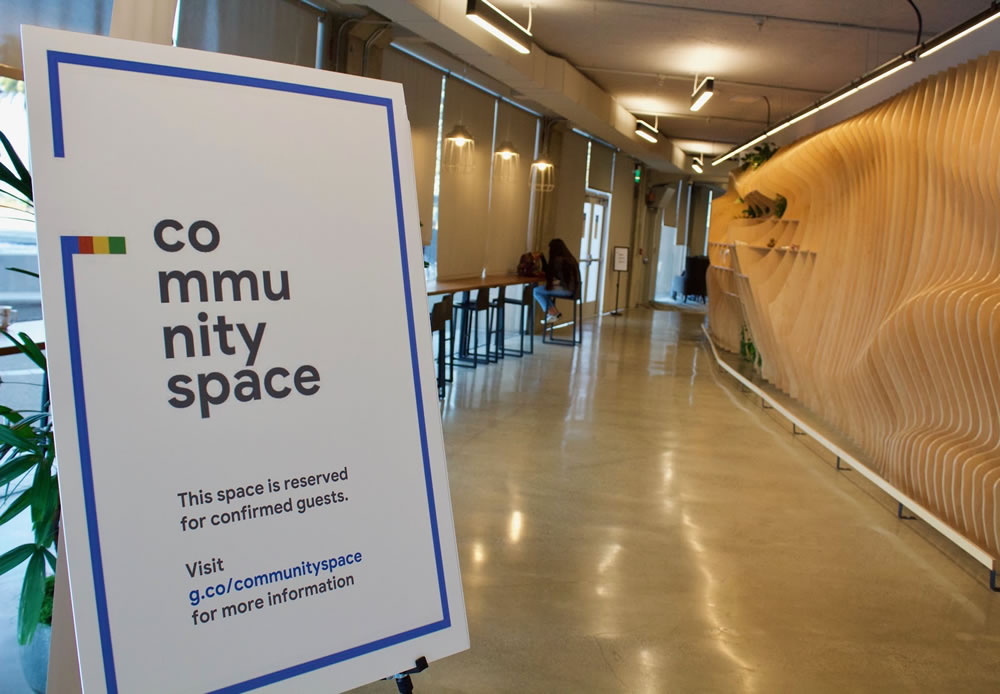 Located on San Francisco’s picturesque Embarcadero, the Google Community Space offers stunning views of the Bay Bridge, standing on full display through the panoramic, floor-to-ceiling glass windows. This San Francisco steel icon is further memorialized inside, where Bay Area artist Morgan Bricca painted a mural of the Embarcadero—a site that both reflects the Bay Area’s vibrant culture and invites “local and social consciousness” to come together inside Google’s Community Space.

Mural of the Embarcadero by Morgan Bricca (left)

Mirroring the high-tech creativity of sf.citi member Google, the Community Space’s impeccable design also encapsulates the company’s careful attention to community needs. As you step into the space, your eyes are immediately drawn to a large wooden bookcase, which doubles as a topographical map of San Francisco. There are two event rooms—the smaller “Work Shop Space” and the “Main Event Space.” Both come with sliding doors that allow you to adjust the space to your needs, white boards, and basic audiovisual equipment. You can even rent out (for free) Google Chromebooks and augmented reality headsets on site.

Wander in further, and you’ll find a number of coworking spaces that are perfect for a productive day in the city. All visitors can help themselves to light snacks and refreshments at Google’s first public-facing micro kitchen, fully restocked every morning. You can also tour the Liquid Galaxy and travel the world through an interactive Google Earth presentation. As if that wasn’t enough, Google employees lead monthly trainings in the space on social media, Google AdWords, UX design, and more.

Since opening in May 2017, Google’s Community Space has registered 900 total members, all of which are community groups and nonprofit organizations located in the Bay Area. And in a nod to the diversity and distinct quirkiness of the Bay, these nonprofits have used the space for just about every purpose, from film screenings, to yoga meditations, to guide dog trainings. In 2018 alone, the space brought in over 40,000 visitors through events and programs hosted by its members.

Take a virtual tour of Google’s Community Space and learn how to become a member here. 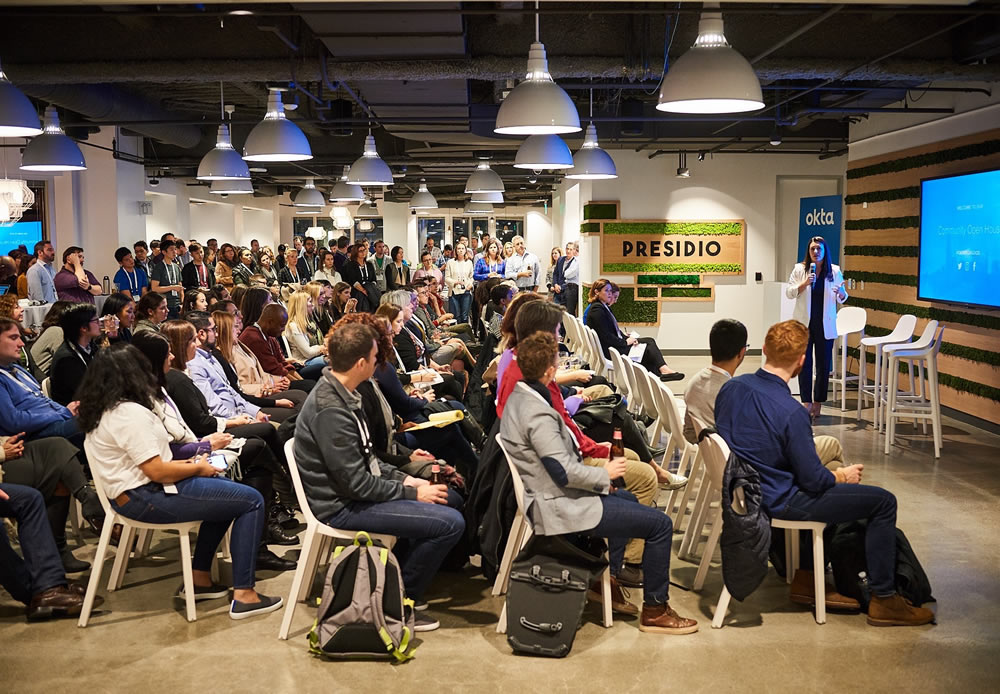 Earlier this year, sf.citi member Okta showcased its new San Francisco headquarters at the company’s first ever Community Open House. Gathering 200 of the city’s tech, nonprofit, philanthropy, and civic leaders in one place, Okta announced a $500,000 donation over the next four years to Tipping Point Community, a nonprofit working to eradicate poverty in the Bay Area.

That same evening, Okta made several other community-focused commitments to celebrate its ten-year anniversary as a company. One of these was a promise to open its doors…literally. A year before moving into the company’s new HQ, the Okta for Good team reached out to a number of community partners to better understand how Okta could most effectively give back to the Bay. One thing they heard among local nonprofits was the struggle to find affordable event space. In response, Okta pledged to offer up space in its San Francisco office to Bay Area nonprofits for events and meetings—free of charge.

More information to come for organizations interested in connecting with Okta on this great offer. 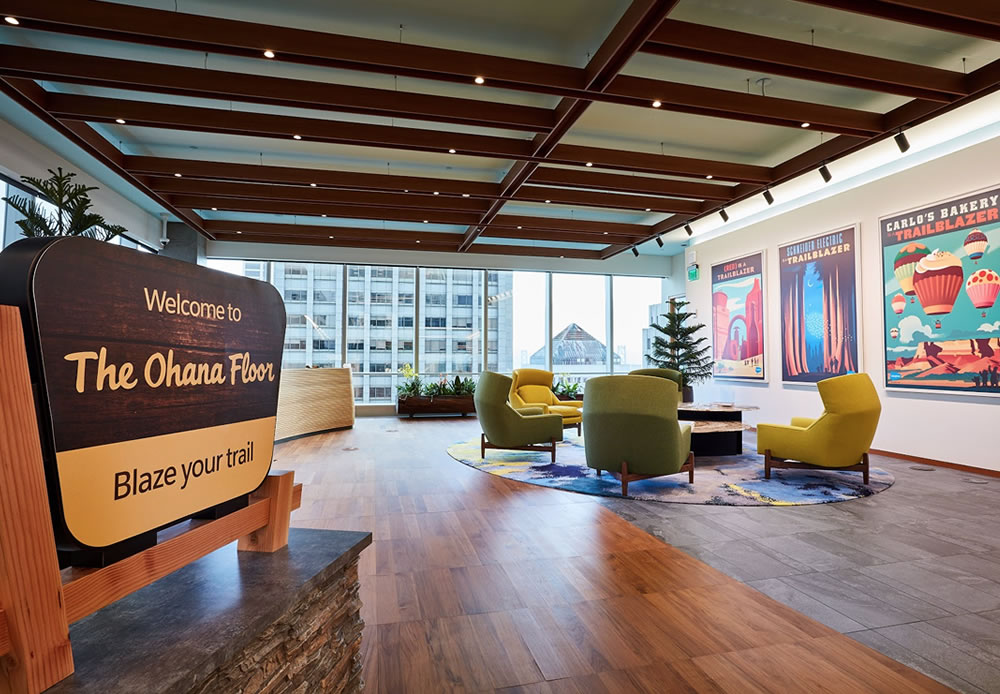 Since opening in early 2018, Salesforce Tower has become much more than a fixture on the San Francisco skyline. A tangible expression of Salesforce’s longstanding commitment to equality for all, the top floor of the Tower is open to everyone—company employees, customers, partners, as well as members of the community.

Sitting at the very tip of Salesforce Tower, the Ohana Floor is the highest occupied floor in the tallest office building west of Chicago. Offering stunning 360-degree views of the Bay Area, you can, on a clear day, see the Farallon Islands over 25 miles away. The best part is that nonprofits, foundations, and education groups aligned with Salesforce’s culture of giving back, can use this surreal backdrop for events. The second of its kind to open in San Francisco, sf.citi member Salesforce débuted the first Ohana Floor in its Salesforce East location back in March 2018.

Both Salesforce community spaces offer a wide range of flexible seating options and no shortage of plants. The Ohana Floor in Salesforce Tower has 24 living columns with roughly 25,000 plants made up of 128 different species. It also showcases the topping off beam signed by government officials, Salesforce executives, employees and construction workers to commemorate the final beam being put into place on April 7, 2017. The late Mayor Ed Lee was one of the officials whose signature is visible. Salesforce recently announced that Tower’s Ohana Floor will be open for free, community tours one Saturday a month.

Many prominent nonprofits and foundations have hosted events on both Ohana Floors, including Swim Across America, American Heart Association, Damon Runyon Cancer Research Foundation, and Playworks, to name a few. Organizations that are interested in inquiring about using either of the Salesforce Ohana Floors can start the process here.

In May 2015, sf.citi member Twitter opened the NeighborNest, a community learning center that connects Twitter employees and the broader Bay Area community through their love of learning and technology. As a mission driven company that seeks to foster greater understanding, equality, and opportunity, Twitter wanted to have a physical space and dedicated staff serving at-risk families in its local community.

Before launching, Twitter spent six months talking to residents of the neighborhood, nonprofit leaders, and local elected officials to better understand the needs of the community and how the NeighborNest might help. Now at almost four years-old, the NeighborNest leverages the skills and expertise of Twitter volunteers to advance digital literacy, workforce development, and capacity-building for nonprofit organizations. Programs offered include everything from computer literacy workshops for parents, career mentorship panels for youth, and Twitter trainings for NGOs.

The NeighborNest is used by Twitter nonprofit partners (left); students next to the grand mural painted by Mural Music Art Project (right)

Since the Nest opened its doors in 2015, Twitter has tallied nearly 15,000 visits by community residents and partners, more than 4,000 hours of programming, and 1,400 hours of service from Twitter volunteers. The NeighborNest is open to Twitter’s partner organizations and clients.

A small sampling from San Francisco’s vast tech ecosystem, these five community spaces are powerful reminders of the many ways tech opens its doors (in this sense, literally) to support our local community. We are proud to represent companies that have already reimagined services and products to enhance our everyday lives, and are now reimagining their own office space to better serve our city. And this is not where the list ends – we know of a few more tech community spaces opening in the coming months. Make sure to subscribe to our newsletter for updates, and let us know about San Francisco tech community spaces we may have missed.