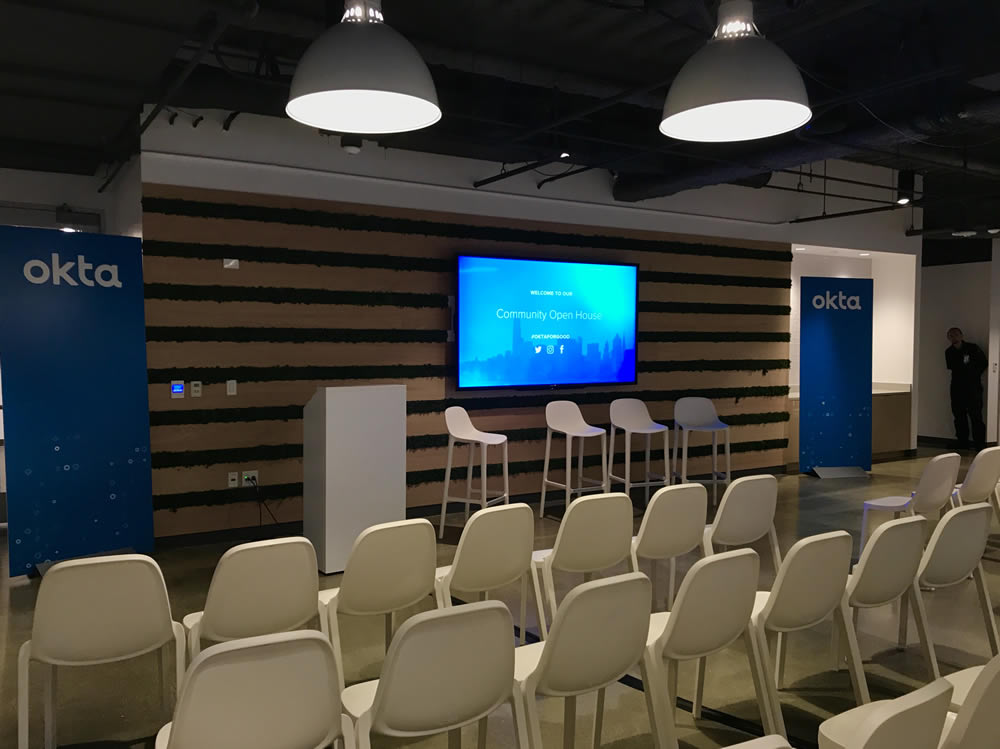 This week, sf.citi member Okta opened the doors of its new San Francisco HQ to local nonprofit leaders, fellow techies, and the community at large for its Community Open House. Mirroring  our work at sf.citi, the goal of the evening was to explore ways tech can “work side-by-side with local leaders to do more together.”

The event followed a momentous announcement by Okta’s philanthropy arm, Okta for Good, to commit $500,000 over the next four years to the Tipping Point Community. A longtime partner of sf.citi, Tipping Point is a San Francisco nonprofit working to eradicate poverty in the Bay Area. In 2014, Tipping Point launched SF Gives and galvanized 20 local companies, including a number of sf.citi members, to raise over $10 million to support low-income families and individuals. Okta was an early participant in SF Gives, and we are thrilled to see the company continue investing in the success of San Francisco and the Bay.

How Tech Can be a Strong Community Partner

After mingling with all kinds of San Francisco changemakers and munching on a delicious spread courtesy of The Town Kitchen, an Oakland-based food company that employs and trains local youth, the speaking portion of the evening began.

Okta CEO and Co-Founder Todd McKinnon gave opening remarks. Reminiscing on the company’s early days, McKinnon described how luck factored into Okta’s initial success. “Because of that,” he continued, “We know that those who are lucky have to compensate by giving back.”

Executive Director of Okta For Good and sf.citi One City Forum member, Erin Baudo Felter, then took the mic. Before unveiling to the audience Okta’s major contribution to Tipping Point, she emphasized the symbiosis between corporate and community success: “We cannot be healthy and successful as a company if our community is not successful.”

To talk further about how tech companies can partner with the greater Bay Area community, Okta assembled an all-star panel of leaders on the topic. Deputy Managing Editor of the San Francisco Business Times, Emily Fancher, sat down with Frederic Kerrest, Okta COO and Co-Founder, Emily Schaffer, Executive Director of Year Up, and Daniel Lurie, CEO of the Tipping Point Community. While the speakers emphasized that there is more to be done, their message was also one of hope and enthusiasm:

There is momentum in this space and we just need to get the ball rolling.
–Daniel Lurie, CEO, The Tipping Point Community

The solution to all of these challenges is about partnership; getting into the trenches with one another.
–Emily Schaffer, Executive Director, Year Up

Okta Keeps its Doors Open to the San Francisco Community

Okta isn’t opening its doors for just one night. The Okta Community Open House was, in fact, symbolic of the tech company’s long-term commitment to the San Francisco community. Here are some other ways Okta plans to give back:

Okta’s story is one of many that breaks the tired narrative of San Francisco’s tech industry being disconnected from the local community. At sf.citi, members like Okta fill us with fresh inspiration as we work to connect tech, policymakers, and nonprofits, and discover new ways tech can be a strong community partner to San Francisco.