Just over a week after the polls closed for the November 2019 San Francisco municipal election, ballots have finally been counted and each race has officially been called. In an election that flew slightly more under the radar than past elections — only 41.62 percent of registered voters turned out this year, compared to 74.49 percent of registered voters in the November 2018 election — San Franciscans still weighed in on a number of key measures and elected offices.

As in years past, sf.citi released a voter guide ahead of the November 2019 election to detail where we stood on the ballot measures. Here’s how our recommendations stacked up with the results. 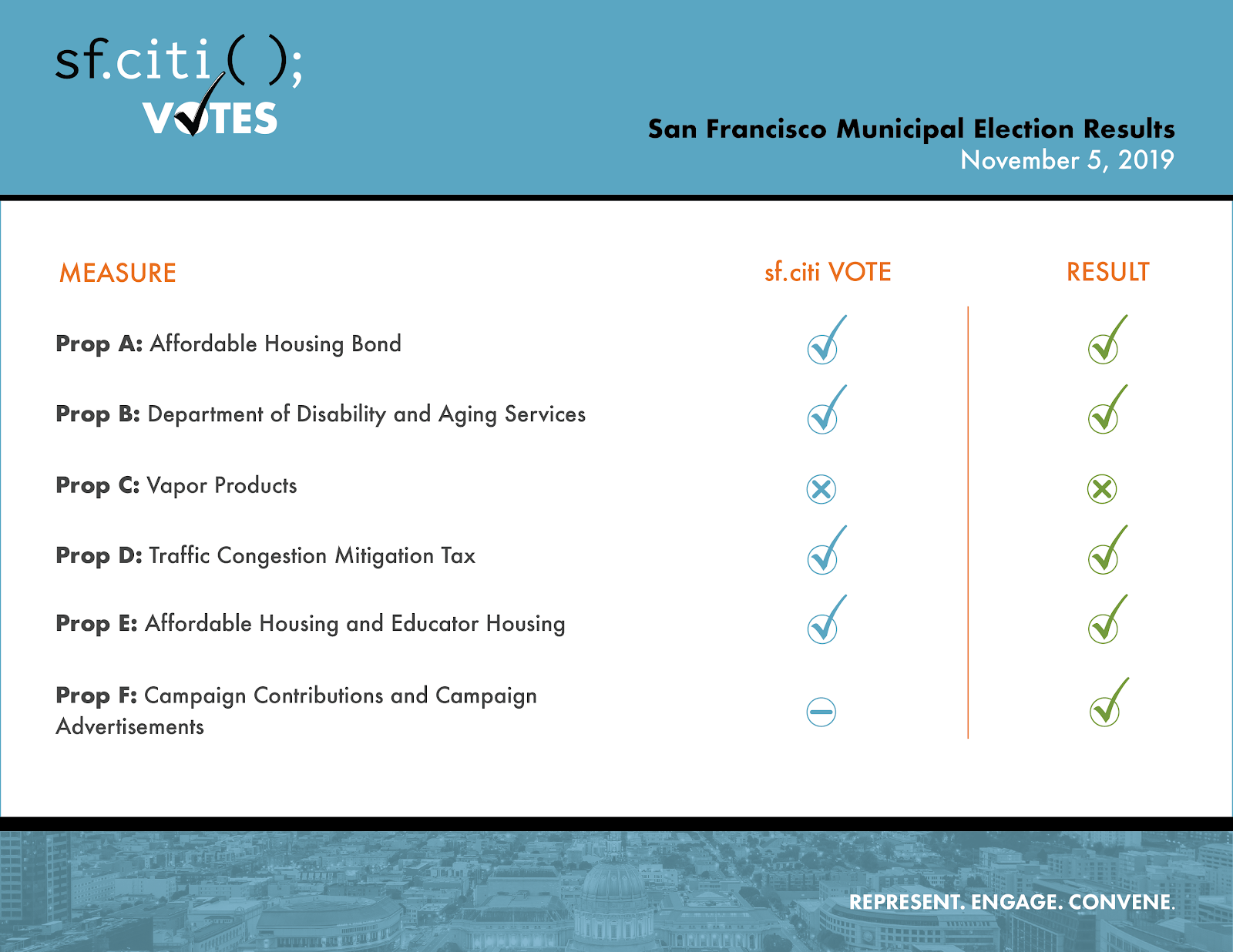 HOW DID sf.citi DO?

Five for five on the measures sf.citi recommended. Most measures were not even close, with many receiving over 70 percent support in the deciding decision. The one close race was Proposition D, or the Traffic Mitigation Tax, which ended up with 67.65 percent of the vote, barely surpassing the two-thirds threshold it needed to pass.

Housing. San Franciscans recognized that our housing shortage must be addressed — immediately. With both Propositions A and E passing, the City will be able to fund and zone more housing for those that need it most. Affordable housing and educator housing will help fill in housing numbers to keep up with development. However, despite passing the largest housing bond in San Francisco history, the work needed to change the tide on housing production in the City still has a long way to go. Looking ahead to next year, you can count on even more housing-related ballot measures.

Vaping Ban. Back in June 2019, San Francisco became the first city in the country to ban the sale of e-cigarettes. Proposition C then created the option to overturn that ruling. Voters, however, resoundingly decided to uphold the Board of Supervisors’ earlier decision to ban the sale of vapor products in the City until approved by the Food and Drug Administration.

Lyft, Uber Tax. Created with the input of Uber and Lyft and gaining the support of almost every major elected official in the City, Proposition D proposed a tax on one of the most popular modes of transportation in San Francisco: ridesharing. In the end, San Franciscans decided that an incremental tax, even if it will most likely increase the price of rideshares, is worth raising more funds for improved public transportation and reduced traffic congestion.

At sf.citi we do not endorse candidates for election. However, we would be remiss not to update you on the results for elected office in San Francisco. Many of the races for office this election were not competitive (five were uncontested) and the most powerful position in the City saw the incumbent, Mayor London Breed, run without any serious contenders. That being said, the race for District Attorney and District 5 Supervisor provided classic election drama. The weekend after polls closed, both races were finally called.

District Attorney. In the race to replace George Gascon as San Francisco District Attorney, Chesa Boudin beat out a loaded field, including appointed interim District Attorney Suzy Loftus, Leif Dautch, and Nancy Tung. Boudin, a former San Francisco deputy public defender, who has never prosecuted a case before will become the City’s chief prosecutor. He ran his campaign on the overarching goal to end mass incarceration and transform the criminal justice system. While that might take time to accomplish, his other priorities include more immediate changes such as ending money bail, doing away with gang enhancement charges, and starting to look at street-level problems and property crime cases through the public health lens.

District 5 Supervisor. Then in District 5, Dean Preston narrowly surpassed the sitting District 5 Supervisor, Vallie Brown. Dean Preston, a tenants’ rights activist, became the first registered democratic socialist to be elected Supervisor in San Francisco since 1979. He campaigned on a number of ambitious campaign promises, emphasizing that San Francisco does not have time for incremental policy changes. For the 2020 March election, Preston promised to propose two ballot measures: one to make MUNI free and another to build 10,000 units of one hundred percent affordable housing within ten years. Because this was a special election, however, Preston will not have too much time to enjoy the victory before heading back to the campaign trail as his seat will be up for election again next November.

As evidenced by the low voter turnout, the November 2019 San Francisco election flew under the radar for a majority of registered voters. Some might even argue that this election’s low turnout resulted in an upset or two. Either way, sf.citi would like to thank all who voted in this election, especially as we prepare for what’s shaping up to be a busy election year in 2020.

Taking a sneak peek at those 2020 elections in San Francisco, all odd-numbered supervisors will be up for election in November, meaning we could, theoretically, have six new members on the Board of Supervisors. In addition to the many important measures in California, San Franciscans in both the March and November 2020 elections will decide a number of key issues ranging from even more housing proposals to a variety of rumored tax measures. One thing is certain: there will be a lot going on in the political world, especially with the presidential campaigns. To help you keep up with all things local, sf.citi is here to monitor the issues that matter most to you and your company.