Not sure what to expect on the November 2019 ballot? sf.citi has you covered. In true sf.citi tradition, we present our 2019 Voter Guide, an easy-to-digest overview of the six San Francisco ballot measures you’ll see in November, plus an explanation of where sf.citi stands on each one. Whether you work at an sf.citi member company or not, we hope you find the below recommendations helpful as you navigate San Francisco’s November 2019 election.

Make sure to mark your calendars for November 5th, or better yet, apply to have a ballot mailed to your house. 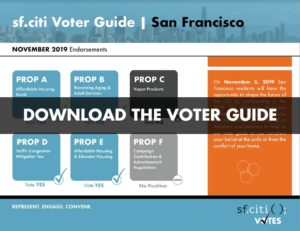 If passed, what will Prop A do? The measure would authorize the City to increase its debt by issuing up to $600 million in bonds to fund affordable housing with an estimated average property tax rate for repayment of $0.19 per $100 in value over 30 years. The measure fixes the maximum rate of interest on the bonds, and provides for a levy and collection of taxes to repay both the principal and interest on the bonds. The ordinance also allows landlords to pass no more than 50 percent of any property tax increase to tenants under the Residential Rent Stabilization and Arbitration Ordinance, and authorizes the Board of Supervisors to adopt future ordinances allowing tenants to waive the pass-through due to financial hardship.

sf.citi Recommendation: Yes
In order to address San Francisco’s housing crisis, the Mayor and the full Board of Supervisors came together to create the largest affordable housing bond in the City’s history. City officials know that building more housing requires a wide range of solutions, and they hope this bond will be a key part of that effort. At sf.citi, we support these collaborative proposals to address the City’s housing shortage, and with the bond slated to lead to the construction of about 2,800 new affordable housing units in the next four years, we are fully behind this measure.

Note: This measure needs a two-thirds supermajority vote to pass.

Department of
Disability and Aging Services

If passed, what will Prop B do? The name of the City’s Aging and Adult Services department and commission would change to Disability and Aging Services. The measure would also require at least one member of the seven-member commission to be more than 60 years old, one member to have a disability, and one member to have served in the U.S. military.

sf.citi Recommendation: Yes
Board President Yee’s name changes were proposed with an important goal in mind: to provide a clearer sense of what the agencies do and who they represent, so that people will more readily seek out their services. sf.citi member companies are comprised of diverse employees from all backgrounds and we support efforts to encourage these employees and other eligible individuals to apply for services, as well as increase representation in the commission’s decision-making matters.

Prop C: Vapor Products
Sponsored by: Jennifer Hochstatter, VP of Supply and Demand Planning at Juul Labs, qualified this measure through the initiative process.
*As of September 30, Juul ended its support for Prop C.

If passed, what will Prop C do? The measure would authorize the sale of electronic cigarettes and other nicotine vapor products by overturning legislation passed earlier this year by Supervisor Shamann Walton and City Attorney Dennis Herrera, which suspended the sale of e-cigarettes not reviewed by the Food and Drug Administration (which currently includes all e-cigarette products). Additionally, the measure would introduce a regulatory framework requiring further licensing and permitting for businesses selling vapor products (even online), enact additional age verification requirements such as scanned IDs, limit the number of devices and nicotine cartridge that stores and online retailers can sell in a single transaction, and establish rules regarding the advertisement of vapor products to minors.

sf.citi Recommendation: No
Last year, San Franciscans passed a ballot measure to ban the sale of flavored tobacco products, and voters are now faced with the decision to ban all e-cigarettes. In light of recent news linking vaping to lung illnesses, we share concern over the possible illnesses and dangers posed by these unregulated devices, particularly with such staggering rates of teenage use. Education is a cornerstone of sf.citi’s policy work and we support efforts to improve the health and wellbeing of San Francisco's student population. Joining many other cities, states, and countries, sf.citi recommends a "No" vote to, in turn, uphold Supervisor Walton’s legislation to suspend the sale of e-cigarettes in San Francisco until they are approved by the FDA.

If passed, what will Prop D do? For all rides taken via rideshare companies, including Transportation Network Companies (TNC), autonomous vehicles, and private transit services vehicles, the measure imposes a 3.25 percent tax per ride. The surcharge drops to 1.5 percent for shared rides or for rides in zero-emission vehicles (this caveat lasts for five years). The charge will only apply to pickups in San Francisco, meaning drop-offs starting outside of the City will not incur a surcharge.

Talk to me about the $$$: Ted Egan, the chief economist with the City Controller’s Office, estimates the tax (most of which will be passed onto riders) will generate about $30 million to $35 million annually. Half of the money raised will head to the San Francisco County Transportation Authority (SFCTA) while the other half will go to the San Francisco Municipal Transportation Agency (SFMTA). The money heading to the SFMTA has been earmarked for transit upgrades, including Muni driver salaries, road repaving, Vision Zero projects, and much more.

Note: This measure needs a two-thirds supermajority vote to pass. The measure would be implemented next year and sunset in 2045.

If passed, what will Prop E do? The measure would fast-track residential development consisting of 100 percent affordable housing. It would also speed up educator housing projects constructed on parcels of public land by reducing zoning restrictions and requiring expedited reviews.

sf.citi Recommendation: Yes
Another housing proposal brought forth by the Mayor and members of the Board of Supervisors, this measure addresses one of the main obstacles to building housing in San Francisco: zoning restrictions. By reducing zoning requirements and streamlining the housing permitting process, this measure will open up more of the City to affordable housing development. This is especially important for retaining high-quality educators in San Francisco, many of whom struggle to afford housing in the City. sf.citi supports this measure to keep our teachers in place and protect families from being displaced.

If passed, what will Prop F do? Also known as the “Sunlight On Dark Money Initiative, ” this measure establishes more limits on campaign contributions and requirements on campaign advertisement disclaimers. These limits include making committees disclose their top three donors when they pay for a political advertisement or other campaign-related materials, banning limited liability companies or partnerships from contributing to candidate committees, and preventing people or companies with any significant interest in a land-use decision from contributing to local officials until 12 months after the City has completed its review of the project.

sf.citi Recommendation: No Position
We take no position on further campaign finance regulations as it does not fall under the issue areas laid out in sf.citi's 2019 policy agenda.