Join sf.citi on September 26th to hear from top District 6 Supervisor candidates at a special, tech-focused debate, hosted in partnership with Hustle and Lyft. 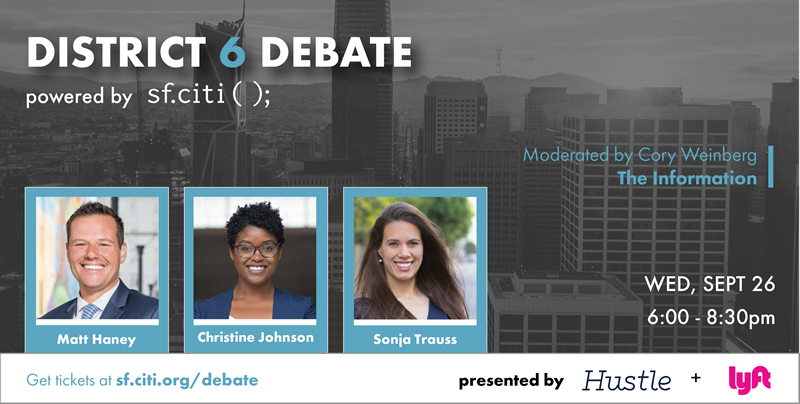 District 6 accounts for much of San Francisco’s recent success, shouldering most of the city’s new construction and housing prominent tech companies and sf.citi members. Encompassing the Tenderloin, South of Market Street, and Mission Bay, D6 also bears witness to many of the city’s struggles, including pervasive homelessness, drug use, and public safety concerns.

On September 26th, we’ll be asking D6 Supervisor candidates Matt Haney, Christine Johnson, and Sonja Trauss what they envision for San Francisco’s future and how they plan to represent tech at City Hall. On theme with the evening’s discussion, the debate will take place at Lyft headquarters and be moderated by Cory Weinberg of The Information.

Get tickets to reserve your spot for this lively discussion on the future of tech and SF!

Get Tickets to sf.citi’s District 6 Debate

ALMOST SOLD OUT: LAST CHANCE TO GET TICKETS TO THE FUTURE OF FOOD – SEPT 13

As if our all star lineup of food tech experts wasn’t enough of a draw, sf.citi and WeWork’s The Future of Food will include gourmet catering by Impossible Foods and a Meatless Marketplace filled with plant-based delicacies.

Following sf.citi tradition, The Future of Food will hone in on the intersection of tech and policy, this time to discuss how tech is driving food innovation and furthering sustainability. We’ll hear from HRH Prince Khaled bin Alwaleed, Founder of KBW Investments and prominent voice in the food tech movement, Lindsay Baker, WeWork Vice President of Sustainability and Wellbeing, Josh Tetrick, CEO of JUST, and California state Senator Nancy Skinner, who championed the passage of a first-of-its kind bill mandating plant-based meal options in hospitals and prisons. 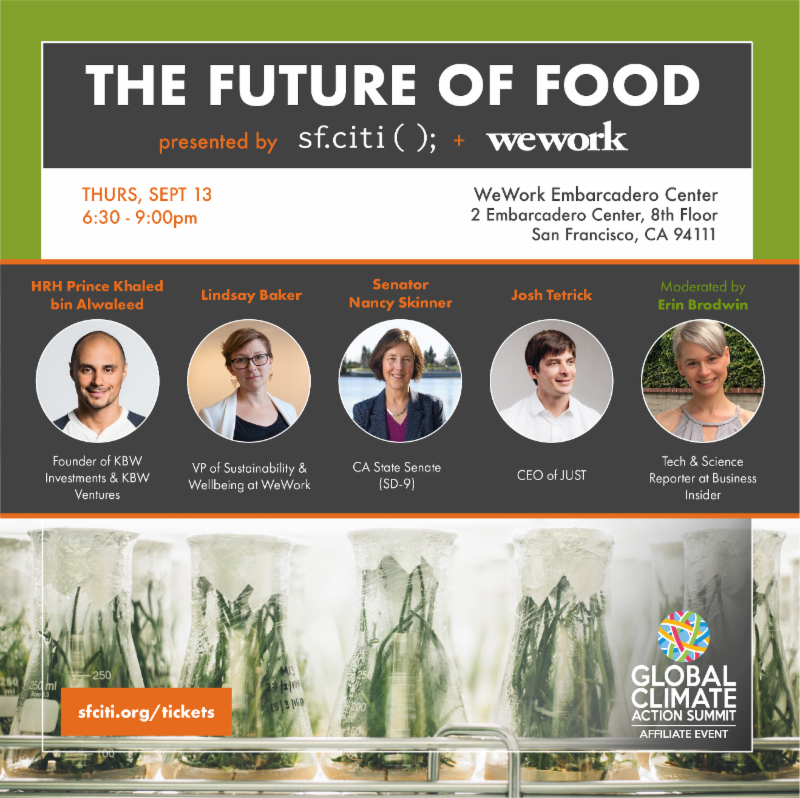 The Future of Food is an affiliate event of the Global Climate Action Summit. As such, it will explore tech, food, and sustainability by taking a closer look at ways businesses, public policy, and technology itself have pushed the sustainability agenda and transformed the culinary landscape through clean meat and plant-based food alternatives.

Get Tickets to The Future of Food

Help us spread the word about this exciting event on social media AND put yourself in the running to win two free tickets. Here’s how:

Deadline to enter is 12pm on Monday, September 10th. The winner will be announced by end of day on the 10th.

With the November midterms just a few months away, sf.citi member Pinterest hosted the latest sf.citi Lunch and Learn with Candidate for Lt. Governor of California, Eleni Kounalakis. We were joined by representatives from a diverse swath of tech companies and sf.citi members, including AdRoll, Affirm, Alaska Airlines, Cruise, Meadow, Postmates, and more.

Kounalakis began the discussion highlighting the link between success in the private sector with success in the public sphere, saying, “The only way private industry can continue to do well and be innovative, and be a gateway to the future, is for government to function.”

If elected Lt. Governor of California, Kounalakis vowed to use her position on the UC and CSU boards to allocate more of the general fund toward higher education and ensure that California’s education system provides adequate training for the future workforce, especially as they navigate the “digital revolution.” The Candidate’s other priorities include halting the expansion of offshore oil drilling and expanding access to childcare.

Question for the candidate: What do you think of technology’s influence on the evolution of democracy?

Candidate Kounalakis took us on a journey through time—all the way back to 600 BC in Athens. Pointing out that Athenian society’s “empowered middle class” gave way to the rise of direct democracy, she underscored the connection between a vibrant middle class and a vibrant democracy, especially one increasingly shaped by technology. She said, “I have fully embraced as a lifestyle all that tech has to offer. But if we don’t keep an eye that there is an empowered middle class that has a stake in the state that is continuing to function, everything will come down.”

Letter designations for November’s San Francisco ballot measures are out. Stay tuned for an upcoming sf.citi update detailing where we stand on each of the five local ballot initiatives.