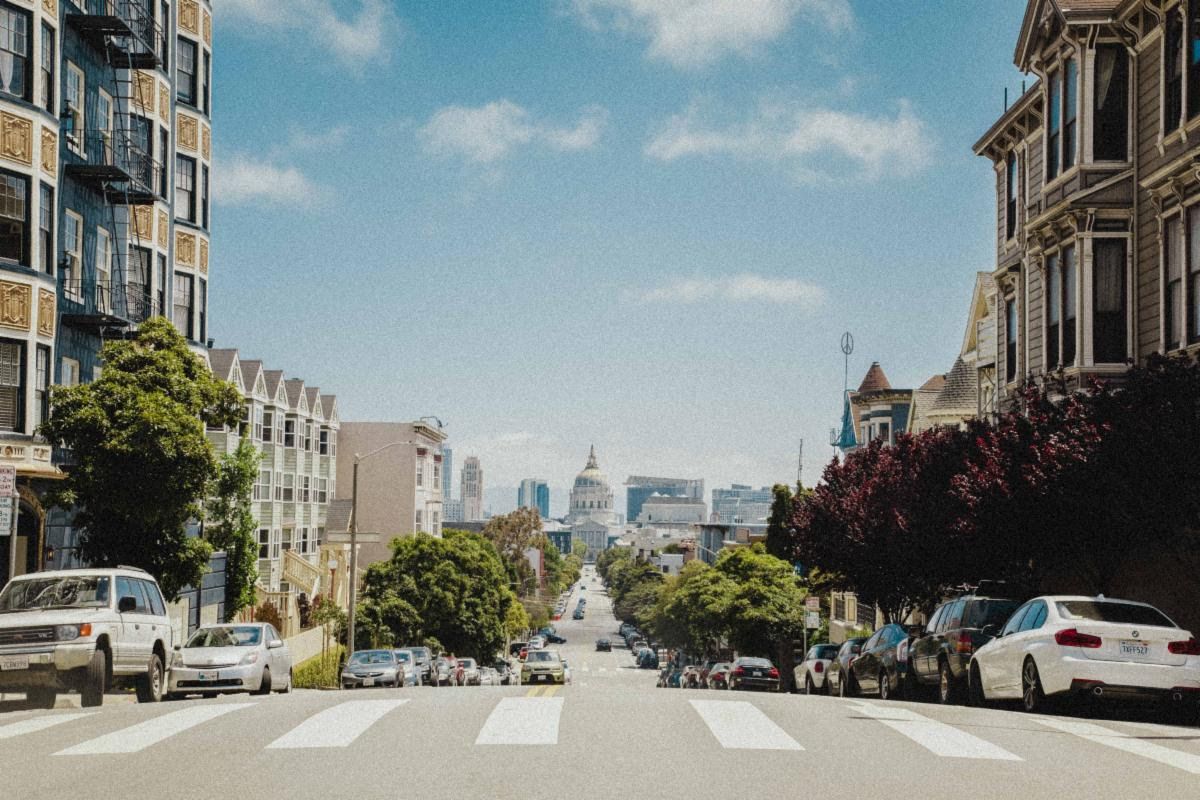 After an exciting Super Tuesday, sf.citi is ready to break down the results of the March 2020 San Francisco election. It’s been just two days since the polls closed, but most of the local races have already been called. In the races not finalized yet, election officials cited that there were too many uncounted mail-in ballots to certify results. Let us guide you through the March 2020 San Francisco election results—as they stand—and examine what they mean for the future of our City.

Several weeks before the California Presidential Primary, sf.citi released our voter guide to say where we stood on San Francisco’s five ballot measures. Take a look below to see how our recommendations stacked up with the March 2020 San Francisco election results.

HOW DID sf.citi DO?

If the current results hold, sf.citi was four for five on our March 2020 ballot recommendations. Of the five measures that passed, three needed to clear more than a simple majority. Propositions B and D both surpassed 66 percent of the vote, while Proposition A topped 55 percent. The one measure on which sf.citi and San Francisco voters disagreed—Proposition E— received the simple majority of votes it needed to pass. As results continue to trickle in this week, we will get a better idea of exactly how close these races will end. 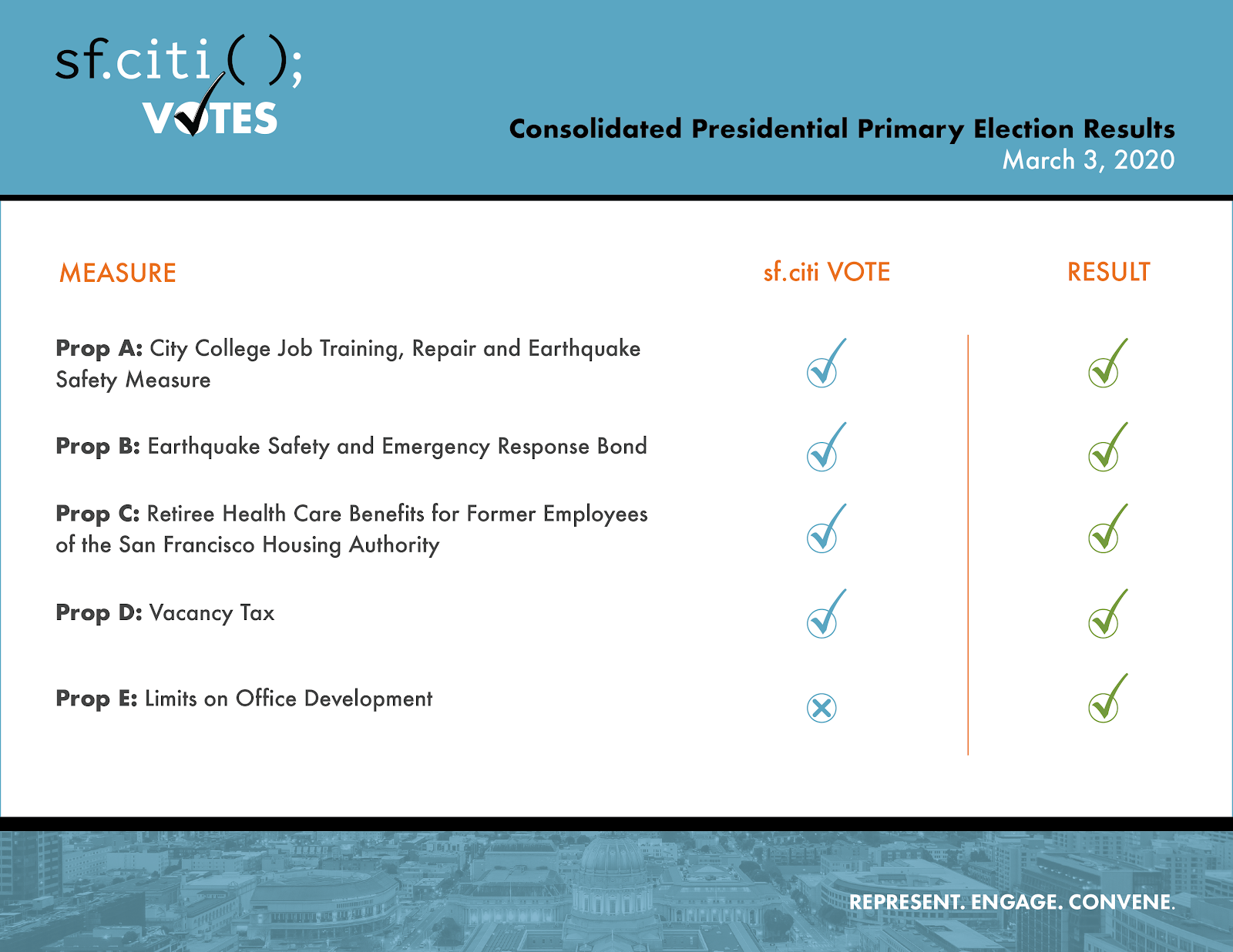 WHAT DO THE MARCH 2020 ELECTION RESULTS MEAN FOR SAN FRANCISCO?

As noted in our March 2020 voter guide, the City’s Chief Economist published a report about the economic impact of Prop E. According to the report, Prop E will result in an 8.5 percent reduction in the City’s GDP, a 5.8 percent decrease in the City’s overall population, and a nearly 8 percent loss in the number of jobs—all within the next 20 years.

Furthermore, Prop E will tighten San Francisco’s office space market. By further limiting the amount of office development, Prop E will likely drive up the price of office space. In a market that has high demand and low supply, developers can increase prices and create bidding wars. This not only enriches developers but also makes San Francisco a top-heavy City, where large corporations alone can afford office space while small and medium-sized companies are priced out.

The most worrisome effect of Prop E, however, will be its crippling effect on the City’s affordable housing funds. Due to linkage fees, new office development projects generate a substantial amount of funding for affordable housing. The San Francisco Office of Economic and Workforce Development estimated that over the next 20 years, Prop E will cut anywhere from $600 million to $900 million in affordable housing fees paid by offices and reduce property taxes between $1 billion to $1.5 billion. In a city where it costs upwards of $750,000 to build a single unit of affordable housing, we cannot afford to significantly impact such a vital and consistent source of funding.

Revitalizing San Francisco’s Commercial Corridors
As anyone who lives, works, or has recently visited San Francisco can recognize, the City must address the rise of rampant vacant storefronts. We need to create an environment that supports the growth of small businesses—the backbone of any thriving city. Hoping to revitalize San Francisco’s commercial corridors, voters came out in strong support of Proposition D, which imposes a tax on vacant storefronts.

The fact that Prop D received over two-thirds of the vote demonstrates the urgent need to address the many problems facing small businesses in San Francisco. Prop D was, in fact, just the beginning. Last week, Supervisor Peskin introduced legislation aiming to streamline permitting for small businesses, while Supervisor Ronen proposed legislation to help nonprofits move into empty storefronts. We have little doubt that small businesses will be a focus of the 2020 legislative session.

HOW DID THE CANDIDATE RACES TURN OUT?

In addition to the Presidential Primary, California voters weighed in on primaries for Congress, the California State Senate, and the California Assembly. While sf.citi does not endorse candidates, we wanted to provide a brief overview of the results. The results narrowed the field down to two candidates for the November General Election. In San Francisco, the primary results did not lead to many surprises as all incumbents advanced (with ease) to the general. Below are the candidates San Francisco voters will see on the ballot in November 2020.

WHAT ARE sf.citi’s PARTING ELECTION THOUGHTS?

Unsurprisingly, San Francisco issues took a backseat to the Democratic Presidential Primary this election. Nonetheless, San Francisco voters passed a number of measures that should benefit the City. Voters also passed Prop E, the consequences of which we as a City will have to reckon with sooner rather than later.

Looking ahead to San Francisco’s November 2020 ballot, we hope you are ready for some heated political campaigns—and we’re not even talking about the Presidential race. San Francisco voters in every odd-numbered Supervisorial District will have the opportunity to elect a new Supervisor. With Board of Supervisors President Norman Yee terming out and Supervisor Sandra Lee Fewer deciding not to run for reelection, we are guaranteed at least two new Supervisors on the Board next year.

To help you keep up with all things local, sf.citi is here to monitor the issues that matter most to you and your company. If you have an issue you want to know more about or a policy you would like us to take deeper dive into, feel free to reach out to Zach at zach@sfciti.org.

Cannot get other user media. API shut down by Instagram. Sorry. Display only your media.