In the lead-up to the June 2018 Election in San Francisco, sf.citi released a slate card detailing our local and regional ballot measure endorsements.

Now, a little over a week later, we would like to show exactly how sf.citi’s endorsements matched up with the final(ish) election results. Take a look at our ballot “report card” below:

NOTE: Proposition C has not officially passed. As of 4pm on June 13th, the measure has 117,207 (50.69%) affirmative votes, surpassing the 50%+1 threshold needed to pass. This may change as the ballot count continues in the coming days – find the most up-to-date count here. 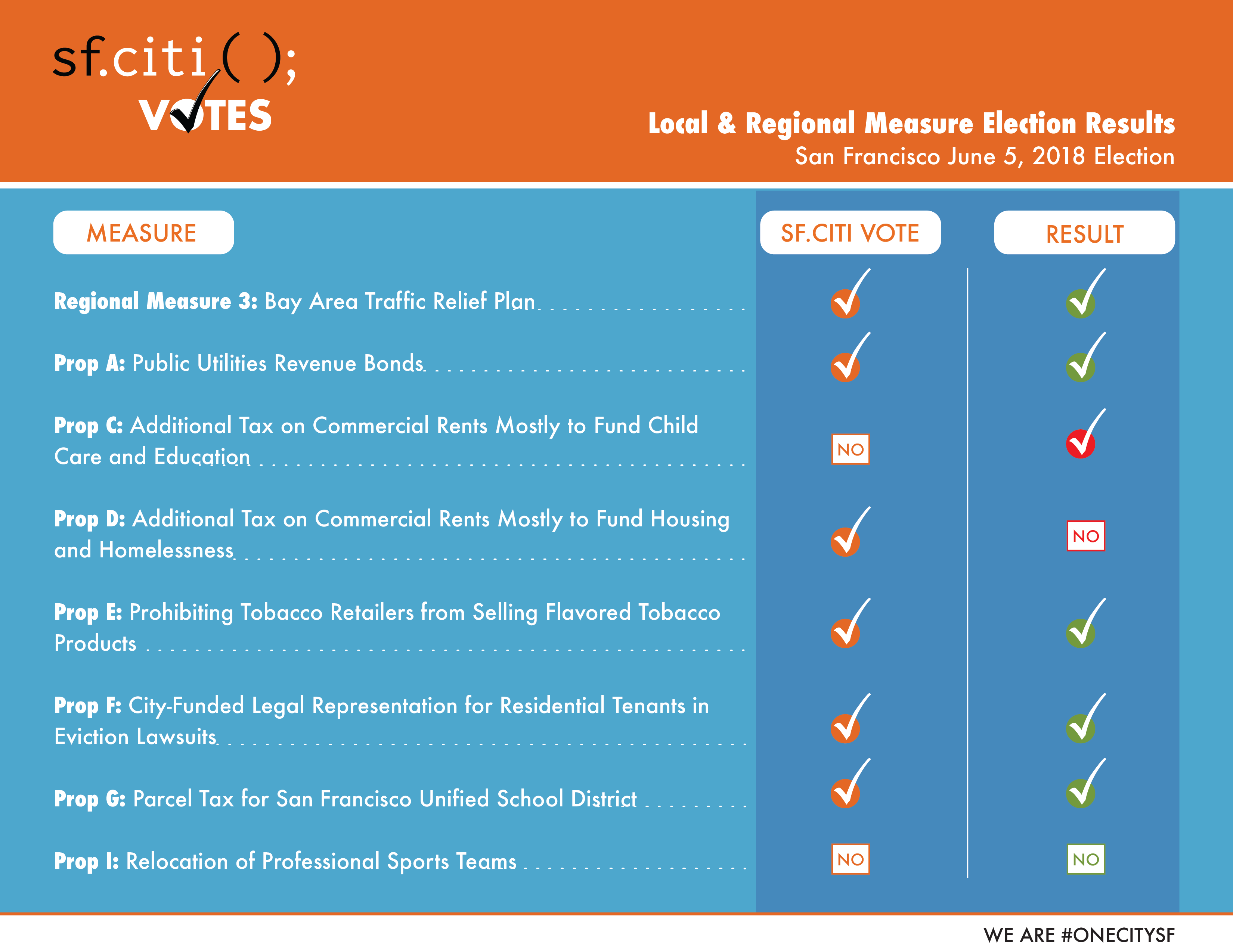 All in all, sf.citi’s June 5th vision for San Francisco wasn’t too off far from election reality.

The most notable difference came with the defeat of Proposition D, a 1.7% tax increase on commercial rents to fund middle- and low-income housing that sf.citi and many in the tech industry supported. Competing for the same revenue source as Proposition C, Proposition D presented, or so sf.citi thought, a reasonable tax measure addressing the most pressing issue currently facing San Francisco: the housing crisis. Mirroring the views of many of our members, sf.citi Executive Director Jennifer Stojkovic explained why sf.citi endorsed Prop D over Prop C in an opinion piece for the Bay City Beacon: “Fundamentally, we as a community cannot afford to support initiatives like universal childcare if we are failing at housing families and individuals first.”

It looks like Proposition C will pass instead (remember that votes are still being tallied), meaning San Francisco commercial landlords with annual gross receipts over $1 million—some of whom include local businesses and tech companies—can expect to pay 3.5% more in taxes on office space rents. The revenue generated from this tax hike, beginning January 1, 2019, will be used to subsidize child care services and raise the wages of early childcare workers.

Unlike Proposition D, which required a two-thirds (66.67%) supermajority vote, Proposition C needs only a simple majority (50%+1) to pass. If it does go into effect, Proposition C may be challenged in the coming months by the California Two-Thirds Vote for State and Local Revenue Increases Initiative, a constitutional amendment that may appear on the November 2018 ballot, which would mandate that all state and local revenue increases receive a supermajority vote. If the amendment were to pass, it may be retroactive to include tax measures such as Proposition C.