While in-house internship programs may be the ordre du jour among today’s San Francisco tech companies, let us not forget that this was not always so. sf.citi, together with the San Francisco Police Foundation, launched Future Grads in 2012, well before tech internships were commonplace. One of the first programs to offer local high school students fully paid summer internships at some of the most prominent tech companies in the city, Future Grads started with just 20 students and has since nearly tripled in size.

From its founding, Future Grads has been applauded by San Francisco leaders for preparing our city’s young people to fill the ranks of tech’s future workforce. The late Mayor Lee looked forward to the potential of the program, stating it “will give youth access to our city’s innovation sector where they will learn the skills they’ll need to compete for our 21st century jobs.” Former Chief of Police Greg Suhr described Future Grads as “part of the long term plan to keep our youth in school, help them graduate high school, and live successful, healthy lives.”

To learn more about the evolution of the program seven years after its start, I sat down with two people who have committed to carrying on the Future Grads mantle: SFPD Sergeant Raphael Rockwell and Officer Sondra Reynolds. 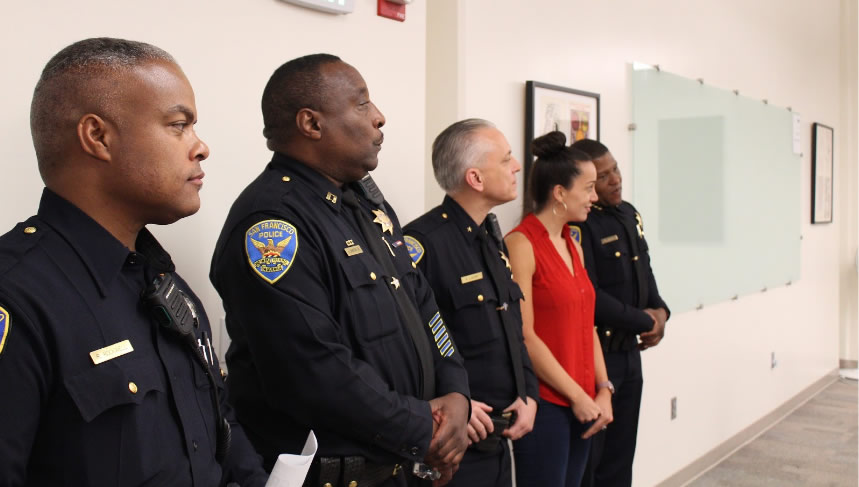 Attracting curious stares from coffee drinkers at a local favorite in the city’s SoMa neighborhood—St. Clare Coffee—Sergeant Rockwell explained how the idea behind Future Grads was to reach out to youth and “connect them with opportunity.” He pointed out that while all Future Grads attend San Francisco Unified School District (SFUSD) high schools, many feel far removed from the tech-powered possibilities of the city’s downtown.

“We give opportunity to those that would never have had opportunity to even recognize that this is in their backyard,” said Sergeant  Rockwell. “Three miles away, the whole mindset changes, from downtown to the outer portions of the city. So it’s kind of unique that we can do that—bring kids downtown to the tech environment, and get some really good results.”

Value of Future Grads for students

A more recent contributor to Future Grads, Officer Reynolds told me what she’s observed to be the most rewarding aspect of the program for participating students.

“Students are excited about being exposed to different opportunities,” said Officer Reynolds. “They come in knowing they have no experience at all and that they don’t need any experience, but that they get to try something different.”

This, for a lot of these kids, is really an opportunity that will get them where they want to be and help prepare them for that.

Officer Reynolds emphasized how having exposure to such high-level work environments before going off to college—something many of us probably would have appreciated—can be especially valuable for students as they try to plan for their future. And they are planning, Officer Reynolds, assured me. In fact, she said, young people “do a lot more to plan for their future now than maybe I did when I was younger.”

For students who unveil a new passion or interest via their Future Grads experience, Officer Reynolds said “they pursue it further when they get to school or go to college.”

What Future Grads says about tech in San Francisco

Future Grads is a strong example of how San Francisco’s tech industry is committed to supporting the local community and its blossoming workforce. Over the years, sf.citi has partnered San Francisco high school students with mentors at AdRoll, Black Girls Code, Cloudera, Coinbase, Managed by Q, Meadow, Techtonia, Rapid Resist, and many more tech companies and nonprofits.

This program is exactly where city leaders and tech can come together to improve the lives of San Franciscans.

More than “bringing a lot of opportunity” to the city, San Francisco tech companies operate under a “generous mindset,” noted Sergeant Rockwell. He cited several examples even outside of Future Grads, in which tech workers have volunteered their time and resources to local causes. He said it is heartwarming to see that “people in tech are giving back.”

For Sergeant Rockwell, working with Future Grads students has changed his perception about technology in general, and its uses by young people. Describing himself as the “Old Al” when it comes to technology, Sergeant Rockwell said the Future Grads he works with are always willing to lend him their millennial insight on “what goes on underneath the laptop.” He concluded that today’s tech-savvy high schoolers are “not disconnected like we all think they are.”

Feeling inspired to join Future Grads and show San Francisco high school students the inner workings of your company? You can do just that by becoming an sf.citi member today.