Multiply the Power of Your Vote by Voting in Local Elections 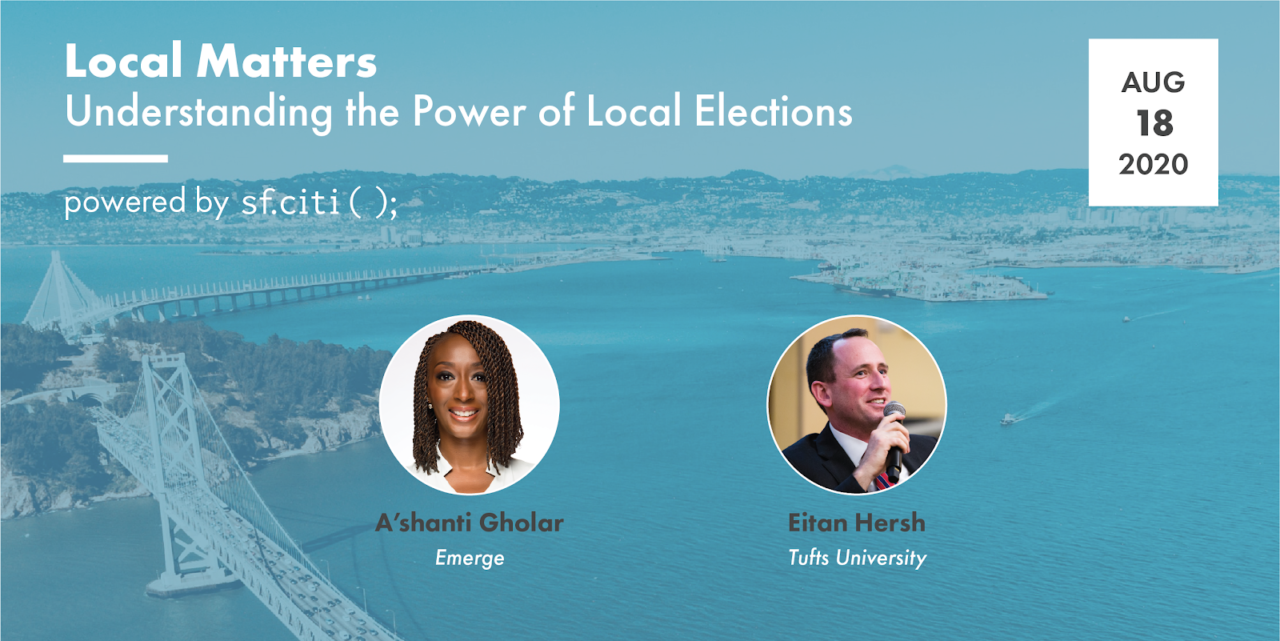 On August 18, sf.citi discussed the importance of voting down ballot at Local Matters: Understanding the Power of Local Elections. We heard from two experts in the field: Eitan Hersh, Associate Professor of Political Science at Tufts University and author of Hacking the Electorate and Politics Is for Power, and A’shanti Gholar, President of Emerge.

Watch our conversation about the importance of voting in local elections with Eitan Hersh of Tufts University and A’shanti Gholar of Emerge.

WHAT’S DEMOCRATIC VICE PRESIDENTIAL NOMINEE KAMALA HARRIS GOT TO DO WITH LOCAL ELECTIONS?

Hosted on the second night of the 2020 Democratic Convention, Local Matters had some timely connections to the freshly picked Democratic Vice Presidential nominee, Kamala Harris. President of Emerge, A’shanti Gholar, explained that the California Senator was, in many ways, the inspiration behind Emerge. In 2002—the year Emerge was established—Harris was running for District Attorney in San Francisco. Many of Emerge’s founders helped out with her race (which she won) and decided, “We want to see more women like Kamala in office.”

Since its founding, Emerge has trained and recruited over 4,000 Democratic women to run for office. The organization now operates in 27 states and has nearly 800 alumni currently serving at all levels of political office, including Lieutenant Governor of California Eleni Kounalakis, Mayor of Oakland Libby Schaaf, and Governor of Guam Lou Leon Guerrero.

Yes! Our speakers were unanimous about the importance of voting in local elections.

A’shanti Gholar of Emerge has observed that many Democratic leaders are looking to learn from state and city elected officials because they are able to make great change and their power can “ripple up.” Case in point has been the exemplary COVID-19 response championed by local leaders, including San Francisco’s very own Mayor London Breed. Gholar shared the stories of several other local leaders and Emerge alumni who have been at the forefront of mitigating the coronavirus’ impact on our communities.

Danica Roem is also an Emerge alum who became the first openly transgender state legislator in the country representing the 13th District in the Virginia House of Delegates. Early on in the COVID-19 pandemic, she teamed up with Virginia Congresswoman Abigail Spanberger to fight a U.S. Department of Agriculture (USDA) rule requiring children to be present with their families to receive school meals. The USDA has since relaxed the regulation, allowing parents and guardians to pick up meals in their children’s stead.

Eitan Hersh of Tufts University, meanwhile, emphasized that local elections represent a “huge opportunity for people who care about politics to multiply the power of their vote.” For the reasons mentioned above, voters at the local level are, to a large extent, blank slates. They can be more easily swayed to vote in a certain way on local issues, especially by people they trust, such as their friends and neighbors.

HOW CAN YOU BECOME MORE THAN A POLITICAL HOBBYIST?

As for keeping up with local issues and ballot measures, sf.citi’s got you covered. Stay tuned for our November 2020 voter guide and candidate questionnaire. We’ll help you make sense of all 13 San Francisco ballot measures and provide a quick overview of the San Francisco Supervisor candidates competing for a spot in City Hall.