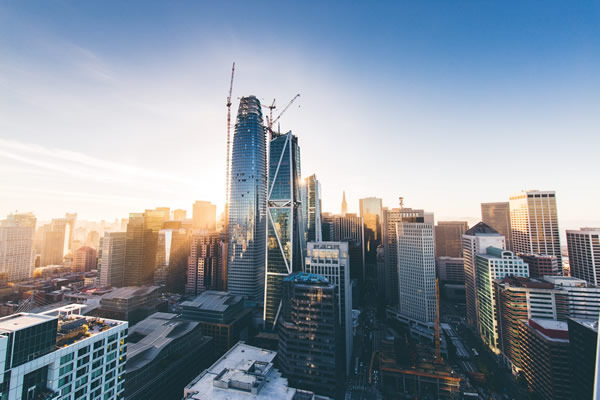 Compared to the centuries-old architecture of its East Coast counterparts, San Francisco’s iconic skyline, like the city itself, is young. For all its youth, San Francisco has always managed to distinguish itself as a refuge for creative thinkers, risk takers, and marginalized communities.

While all of us appreciate the nostalgia of San Francisco’s past, we at sf.citi are especially excited for the future. We believe that San Francisco’s vibrant technology community is fueling the most recent iteration of an age-old tradition rooted in innovative thinking and progressive change.

During the 19th century, the city gave birth to one of the United States’ earliest waves of entrepreneurship: the Gold Rush.

In the 60s, 70s, and 80s, San Francisco emerged as a global leader and champion of gay rights, women’s rights, sexual freedom, and environmentalism.

Now, San Francisco is home to a growing number of business leaders who use cutting-edge technology to tackle some of the most difficult problems facing our society and our city. As we look back, we can easily identify the quintessential San Franciscan thread of progress stitching together the city’s past and present.

Although Silicon Valley has long been a hub of technological innovation, the migration of tech leaders to the city itself is quite recent. And, in another nod to San Francisco history, the change was born out of calamity. At the height of the Great Recession of 2008, San Francisco was suffering from a 9.4% unemployment rate.

To alleviate the economic downtown, the late Mayor Ed Lee led the passing of a temporary tax incentive to draw tech companies and much-needed revenue to the city. This, coupled with the city’s 11.4% office vacancy rate (high for San Francisco), revitalized San Francisco’s developing Mid-Market and Tenderloin neighborhoods, which now house the headquarters of some of the city’s (and the world’s) leading tech companies.

As tech’s presence in San Francisco grew, so did the need for sf.citi—that is to say, a voice to advocate on behalf of both the city’s burgeoning technology industry and the larger San Francisco community. Since its founding, sf.citi has been committed to forging connections across sectors to drive conversations and policy decisions that are beneficial to all.

One of sf.citi’s first policy wins came with the landslide passage of Proposition E in 2012, changing the city’s tax policy to a gross receipts tax. Prior to Prop E, San Francisco levied a flat 1.5% payroll tax on all companies with over $250,000 in payroll. For many of the city’s newly relocated tech startups, this antiquated structure was problematic, as they were forced to pay taxes on each new hire before they began generating substantial revenue. sf.citi called for the adoption of a gross receipts tax, which would encourage continued job creation and economic investment (in a city still recovering from the recession) by taxing companies’ total gross revenues.

Committed to helping San Francisco’s fast-growing tech industry serve the local community, sf.citi was also a leader in championing tech-driven volunteer programs. In 2014, sf.citi partnered with the San Francisco Education Fund and the San Francisco Unified School District (SFUSD) to launch Circle the Schools. The idea was to share tech’s time and resources with local public schools, as well as arm the San Francisco’s future generations with the necessary skills and experience to succeed in a rapidly modernizing city. Through Circle the Schools, sf.citi members “adopt” one, or multiple (depending on their size and capacity), SFUSD schools. Companies then help design volunteer activities, powered by their own employees, that address the school’s needs while tapping into each company’s expertise. Five years later, and the results are a testament to what can happen when we harness the power of technology and people. To date, sf.citi members have circled 28 San Francisco schools and donated over $557,000 in resources.

More recently, sf.citi launched a quarterly event series known as the One City Forum. Led by nine volunteer members who are leaders in both the tech and nonprofit arenas, the Forum aims to connect sf.citi members, nonprofit organizations, and community leaders around pressing issues in San Francisco. Past One City Forum discussions have covered everything from diversity in tech, to immigration, to federal budget cuts, with input from influential participants like Senator Scott Wiener, president of the University of California System Janet Napolitano, Y Combinator President Sam Altman, and more.

The precise shape and nature of sf.citi’s work has evolved significantly since its founding in 2012. And as San Francisco continues to change, we too will continue to evolve.

Looking at San Francisco’s changing skyline, I encourage you to see both the city’s enduring foundation and the promise of new horizons. Let us not forget that San Francisco’s history is deeply rooted in pushing the cusp of innovation for the rest of the United States and even the world. At sf.citi, we hope to honor this tradition by embracing the many positive changes technology can bring, all while helping our members meaningfully engage with the community we love and in which they operate: our beloved San Francisco.

Steve Sarner is the Head of Sales and Advertising Solutions at Goodreads – an Amazon Company. He also serves on the sf.citi Board.