Preparing for the “Fourth Industrial Revolution” 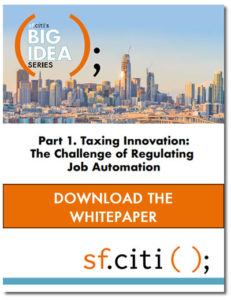 The robots are coming and they want our jobs. Or do they?

It’s true automation and artificial intelligence (AI) play an increasingly important role in our economy. Automation has changed the way we shop, eat, travel, and consequently, the way we work. One has only to follow the rapid development of autonomous vehicles and imagine how they might soon change reality for anyone who drives for work. The modern global economy is undergoing a change so profound some have coined it the “Fourth Industrial Revolution.”

What does this change mean for workers? And what role should government play in regulating job automation? Here in San Francisco, Supervisor Jane Kim has offered one idea: tax employers for each job they automate, in order to replace lost income tax. Kim has yet to propose a formal tax measure, but she recently launched a statewide campaign to explore the issue.

On the face of it, the idea to tax employers for each human worker replaced by a robot seems logical enough. But in practice, this approach oversimplifies the real and varied impact of automation on jobs and would be difficult to implement without more robust data about the uses of automation.

A newly released white paper from sf.citi, a San Francisco-based nonprofit tech advocacy organization, calls on government and business to collaborate on an appropriate approach to automation in the workplace. sf.citi identifies two key characteristics of automation that have been often overlooked by legislators.

First, automation in the workplace is nothing new. Since the first Industrial Revolution, automation has reduced the need for some job categories, such as ferrier (people who shoe horses), telephone operator, or travel agent, while creating many others, such as software engineer, graphic designer, or auto mechanic.

Second, the impact of automation on workers is more complex than Kim’s analogy suggests. Regulators will be hard pressed to identify specific human jobs lost to automation. One could argue that the proliferation of email and cloud storage reduces the need for filing clerks. The list is endless.

Automation may reduce the need for human labor in certain industries, but that doesn’t mean current job categories will be eliminated. In fact, only one of 270 occupations listed in the 1950 U.S. Census has since been completely eliminated by automation. That one occupation? Elevator operator.

Artificial Intelligence and automation have already radically changed the way we work, and will continue to do so. But certain uniquely human abilities like creativity, communication skills, and negotiation skills will always be in demand. Robots will change the way we work, but they can’t replace us.

sf.citi calls on government to collaborate with the private sector to address automation in the workplace, rather than stifle innovation and growth through new taxes. sf.citi is currently working with the San Francisco Mayor’s Office to open a new dialogue on exactly this issue.

Only through public-private collaboration can we ensure that automation benefits everyone. We need to retrain workers for the practical job skills they will need a decade or more in the future. sf.citi members are already beginning this work through internal employee development programs, as well as public partnerships like TechSF, which places locals in apprenticeships with tech employers. Critically, we must prioritize educating young people for the future careers while they are still in school. sf.citi members have adopted nearly half the public schools in San Francisco through our Circle the Schools program, and have a regular presence mentoring students, donating new tech hardware, and providing guidance on curricula. We need more engagement like this.

The future is here, and we can’t tax or regulate it away. We must embrace it and ensure everyone benefits from change.